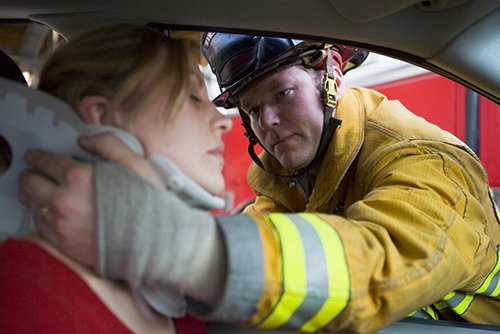 A few years ago, Trace Investigations received a call from a personal injury attorney whose client, a high school senior, was seriously injured in a vehicular collision a week earlier. The wreck had occurred in a thinly populated area of the county and no witnesses were listed on the accident report submitted by the Sheriff’s department. The young woman, let’s call her Amanda, was returning home during the twilight of a Wednesday evening in her small compact car when a large SUV turned a corner and ran into her head-on, spinning her vehicle into the ditch. The SUV driver, who was uninjured, came to a stop and phoned 9-1-1. The front end of his truck was heavily damaged, but the heavy front bumper rail had prevented any damage to the front axle. Amanda’s vehicle was totaled. She was barely conscious when the ambulance arrived, her left leg was broken and she had chest and neck injuries.

The SUV driver, let’s call him Lester, told the investigating officer at the scene that it was Amanda who was across the center line going into the curve. Amanda said the SUV driver had turned the corner fast, and it was he who was across the center line on the two-lane paved road when their vehicles hit. A wooded area on the north side of the road had prevented either driver from seeing the other vehicle approach. Lester said he hadn’t seen any headlights approaching and Amanda told us that it wasn’t that dark yet and she hadn’t turned on her headlights either. It was strictly a “he said, she said” situation. Unless we could find a witness among the two houses on the other side of the road and near the curve, or otherwise impeach Lester’s version of the accident, Amanda’s ability to recover damages would be limited to her insurance.

The deputy who investigated the accident told us that a lady who lived in the house closest to the curve had heard the accident and, when she looked out, she saw Amanda’s car in the ditch and Lester standing outside his SUV on his cell phone. She said the only other person in the house was her teenage son who was upstairs in his room. He told his mother he hadn’t seen the wreck. We were contacted a few days after the wreck, and, after talking to the attorney and reading the accident report, we headed to the accident site, arriving on the same day of the week and the same time of the day. After examining the blind curve, we knocked on the door of the lady who had heard the accident. Let’s call her Mrs. Grady.

Mrs. Grady confirmed she had told the deputy. We asked if we could speak to her son, let’s call him Davey, who was in the living room with his mother. She said yes, but cautioned that he had been upset once he learned that his classmate Amanda was the one injured in the accident. Mrs. Grady repeated that Davey hadn’t seen the accident. We thought he might have.

Amanda had told us that a classmate of hers lived in the house near the curve and when she drove by every Wednesday evening after her band rehearsal at school, she usually saw David looking out his bedroom window as she drove by. She said his window was often open and she could see him clearly sitting at his desk. But she couldn’t recall if she had seen him there the night of her accident. She told us that he had asked her out a few times that semester, but she had turned him down each time. Amanda felt Davey might be obsessed with her. We knew it was also possible that by now Davey might have realized that Amanda had seen him at the window a few times.

Davey was a nice enough kid, and he seemed genuinely sorry that Amanda had been hurt pretty bad in the accident. After a few minutes of gentle conversation about his school and asking how well he knew Amanda, Davey started crying. He admitted that he had been looking out his bedroom window that Wednesday evening, waiting for Amanda to drive by. He said it was like “clockwork,” that she always drove by around the same time. He saw her approaching from the direction of town and the high school, and at the same time, he heard the engine of the large SUV driving “pretty fast” downhill approaching the curve from the other direction. He said the SUV took the corner wide, crossing the center of the road, and ran into Amanda just as she got to the curve. He didn’t tell anyone he had seen the wreck because he was mad at Amanda for not wanting to go out with him. He didn’t realize how badly she had been injured until the next day at school, and he had regretted not saying anything but was afraid to come forward. Davey’s mother was understanding and reassured him that he did the right thing by telling us what he saw. We took a statement from Davey and submitted a report to our client the next morning.

Result: As a result of our investigation, Lester was arrested and Amanda’s attorney was able to reach a settlement with his insurance company, providing just compensation for her pain and suffering.