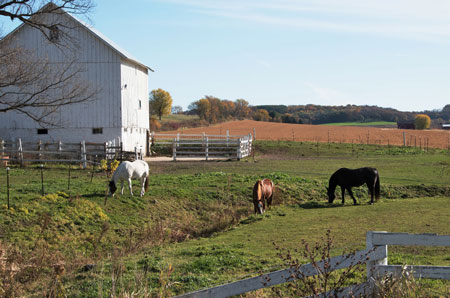 A suspicious death investigation in Indiana reminded us that things are not always what they seem. The case was featured in an article in The Journal of Forensic Sciences by Joseph Prahlow, a forensic pathologist at Western Michigan University’s Homer Stryker School of Medicine.

A partly clothed 81-year-old woman was found dead on a muddy floor in a horse barn on an early summer day. Her bra and shirt had been removed, and her pants and underpants had been lowered. Her grandson found her and called the police, who initiated a homicide investigation when they noticed blunt force trauma on the body. However, after a forensic autopsy and further investigation, what first appeared to be a possible sexual assault homicide proved to be a tragic accident.

The forensic examination and the subsequent investigation resulted in a reconstruction of the sequence of events leading to the lady’s death: After opening the horse stalls, she slipped on the barn floor and hit her head, broke her hip and faded into unconsciousness. When she fell, the victim had been filling water buckets in the horse stalls and dropped the hose which the grandson found still running the following morning. As she lay there her beloved horses, eager for their feeding, tried to nudge her awake and caused further bruising and trauma on her body, including one horseshoe-shaped mark, which proved to be inflicted postmortem. The autopsy revealed that the original fall occurred the evening before her body was found by her grandson when the overnight temperatures had dropped dramatically. It was the extreme overnight cold temperatures and wet barn floor that resulted in the loosing and removal of her clothing.

Lying on the wet floor as the overnight temperatures dropped and unable to call for help or get up, the traumatized semi-conscious horse lady had sought some relief from the extreme cold by removing clothing, the phenomenon known as paradoxical undressing. Well-documented in case histories it can lead to an incorrect determination at an equivocal death scene, according to Dr. Prahlow. The journal article further noted: “This case serves to emphasize the fact that failure to recognize accidental deaths, and instead consider them to be homicides, can result in wasted time and resources, false allegations, and possible life-altering consequences.” Indeed.

A victim’s clothing can impact a death scene investigation, leading to an incorrect determination by a coroner or police investigation. Without a thorough investigation of a death scene and events leading up to the discovery of the body, an accidental death can easily be designated as a homicide or suicide, and conversely. The journal article above reminded us at Trace Investigations of a suspicious suicide investigation we conducted several years ago. A young man had been found hanging from scaffolding, and the police had labeled it death by suicide. The family believed the death was a homicide and staged as suicide by one or more men who believed the victim was going to report their cheating on college exams.

Our investigation came to a different conclusion, different in that the manner of death could not be determined. By the time we were retained, no evidence remained of the death scene. There was no police investigation, just an automatic determination of suicide by hanging, not unusual for young male victims. No autopsy had been conducted. We focused on constructing a psychological profile of the victim during the year leading up to his death. No evidence of a suicide ideation was found, nor were there any indications of a cheating scandal or other signs of a possible homicide. The young man was a good student and had been making plans for the future. He had no adverse medical history. However, we found signs of preoccupation with a dangerous sexual practice, autoerotic asphyxiation by ligature strangulation, which can result in an accidental death when a “safe release” plan fails before unconsciousness. When this happens, most autoerotic victims are found in various states of undress with genitalia exposed. Our victim was fully dressed in winter clothing. Further study and investigation of autoerotic behaviors confirmed that a victim can pass out suddenly before the final act leading to the sought-after “high” occurs. Without a safe release plan, such as a slipknot in a ligature, the victim succumbs to strangulation in a matter of minutes, an accidental death by misadventure.

Most coroners will make a correct determination of the manner of death. However, each death scene writes its own script and an equivocal death investigation will often lead to an unexpected result. Clothing optional.

When you have concerns about a suspicious death determination and need assistance with an independent investigation, contact Trace Investigations at (812) 334-8857.