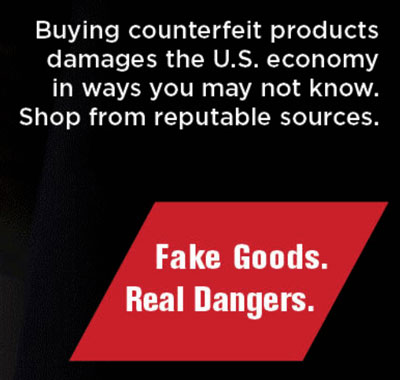 Each year the U.S. Customs and Border Protection seizes counterfeit merchandise from all over the world, designed for distribution to alternate retail markets around the country, including flea markets, small “mom and pop” retail shops and e-commerce outlets. Major manufacturers such as Coach, Nike, Bose headphones and Rayban sunglasses are routinely copied and offered to unsuspecting consumers looking for a savings. To the untrained eye, the copies are often difficult to detect but are always of inferior quality and craftsmanship. And almost always, the sale of counterfeit goods supports a criminal enterprise, such as drug traffickers and terrorist groups. Often times, the consumer who purchases the item is unaware that they are part of a “financial trail” of death and destruction, and are insuring that a legitimate business and manufacturer is losing money.

Counterfeit products have flooded retail marketplaces. A few years ago, Trace Investigations identified a vendor selling knock-off designer handbags at an event sponsored by a local Chamber of Commerce. In most instances, the real products are not offered for sale in non-traditional venues, but in major national stores and in the designers’ own retail shops. There are numerous web sites which illustrate how to spot fake designer merchandise, and every major designer has a place on its website to report an encounter with a fake item bearing their label.

Not only are most counterfeit products of low-quality but they can cause injuries. Last year, U.S. Customs saw a substantial increase in the seizure of fake personal care products, pharmaceuticals and consumer electronics. For more information on the top products seized and the risk to safety and health, go to CBP.gov.

If you encounter fake consumer products, contact your state’s attorney general or report it to the Federal Trade Commission at ftc.gov.