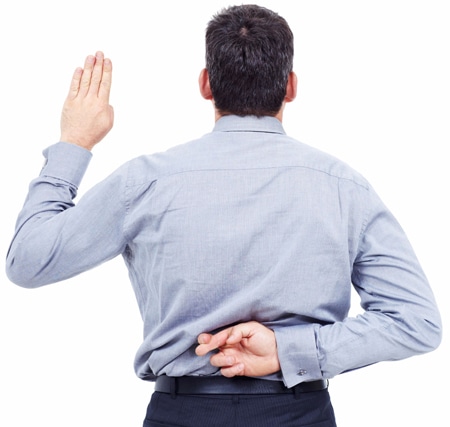 You may have heard an older or retired detective use the phrase “bagging the lie.” It means what it sounds like: You have the proof that someone is lying about something. It might be an innocuous white lie or it could be an outright fabrication relative to an ongoing criminal or civil investigation. As are most of us, police detectives and private investigators are on the receiving end of lies of varying degrees on a regular basis. You can learn how to spot one. Just as importantly, you also have to learn how to distinguish between a fabrication and a faulty memory. If you interview ten witnesses to a traffic accident or a gas station robbery you will most likely get ten different versions of the same incident. Our memories play tricks on us.

In her book, “Liespotting: Proven Techniques to Detect Deception,”  Pamela Meyer, MBA, CFE, links three disciplines designed to help us detect deception during our interactions with others; 1) facial recognition training, 2) interrogation training, and 3) research development in the field of deception. One liespotting tip from her book you may recognize: A child will often cover his or her mouth when telling a lie. An adult will try to resist this automatic and universal impulse, but often give themselves away in the attempt by a quick touch or sweep of the hand across their mouth. Another tip: Men will tend to rub their eyes when telling a lie, while women will most likely touch gently below their eyes. These are the “speak no evil” and “see no evil” impulses.

In the landmark text, “The Myth of Repressed Memory: False Memories and Allegations of Sexual Abuse,” Dr. Elizabeth Loftus and Katherine Ketcham address the fact there is no controlled scientific support for “recovered” memories. Loftus is a University of California-Irvine psychologist and law professor who has proven in controlled experiments that she can make you remember things you never experienced. In a 2013 interview in the New Scientist online magazine she noted: “We all have memories that are malleable and susceptible to being contaminated or supplemented in some way.”

Many of us remember the McMartin preschool trial of the 1980s-90s, when members of the McMartin family preschool in California were charged with numerous acts of sexual abuse of the children in their care. The long trials ended without a conviction and all charges were dropped. As we all were to learn, it was the part of the hysteria and moral panic of the period, when real child abuse allegations and rumors of Satanic ritual abuse were coming to light. There were no controlled forensic interviews of children in those days. The McMartin case is an early and tragic example of the false memory syndrome.

Although false allegations and false memories will never disappear, the investigative techniques for addressing the issues have improved. Forensic interview training and “liespotting” is now a part of the legal investigator’s toolbox.

If you know someone facing a false allegation in a criminal or civil matter, call Trace Investigations at 800-310-8857.