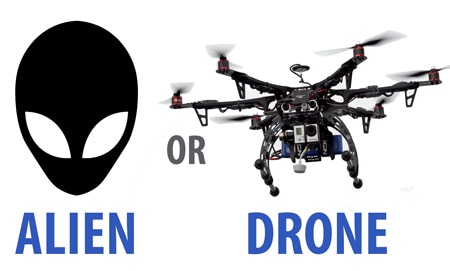 Have you noticed that there have been virtually no UFO sightings in the U.S. in that last few decades that were associated with alien visitations to earth? What happened? Could it have been the sudden appearance of portable camcorders thirty years ago and then a few years later the ubiquitous cell phone camera? What’s your excuse for not getting a video or photograph of that “unidentified flying object” that was hovering over your cow pasture the other night?

While the use of the term “UFO” is not as prevalent anymore, there is a new acronym which has been garnering attention, the UAV, the “unmanned aerial vehicle” but more commonly referred to as a drone. Another term in use for drones is “unmanned aerial systems” or UAS.

Last December the Department of Transportation announced that, as of February 19 this year, drone users will have to register their devices. Airline pilots are reporting an increase in the number of drone sightings during flights, prompting the DOT’s response. The responsibility of developing guidelines for the commercial use of drones falls to the FAA. However, the DOT said the new rules do not apply to the recreational use of UAV. Well, maybe, maybe not.

We have in recent years witnessed the widespread deployment of drones by our military forces, with a great degree of success measured with a war craft barometer. Drones are already in wide usage in commercial sectors too. Property managers and developers are using them, as is the insurance industry for property inspections. Disaster recovery services and first responders regularly deploy UAVs equipped with hi-res cameras. These uses provide an obvious benefit to not only the user, but to the public as well, in that cost and timelines are contained and contracted, thus bringing increased effectiveness and efficiency. The new federal regulations at this writing seem reasonable enough for large scale commercial entities such as insurance companies and other industries already situated to absorb regulatory burdens. However, smaller commercial enterprises are objecting to the fed’s heavy-handed approach and the registration of all drones over 250 grams, which would include many small drones used for recreational purposes and not equipped with cameras. The FAA defended the drone registration process, noting that Congress has defined “aircraft” to include drones.

However the drone saga plays out as far as federal registration is concerned; it is a safe bet that many private investigators are already using them during their case work. How many have registered with the FAA is a bet of a different sort. However, most of us realize that the use of a drone with video camera attached does not waive the privacy rights of an individual. There is nothing wrong with deploying new technologies to protect the legal interest of our clients. But a legal interest cannot be protected by illegal means.